“When I look at water, the thing that comes to mind must be the same for you and for me, and so it must be for a bird, a tiger or a fish,” mused Shree Vinayak Kaurwar, a yogi who had gone to stay in the jungle to conquer his fears, and will be returning to the same jungle to conquer his remaining centipede phobia. That may be so. Underneath our layers of incomprehensibly priced designer clothing and perfumed body lotions, which promise everything short of anti-cavity, we are all animals with inherent hungers. The Indian (yes, he is Indian, not Bangladeshi) yogi and I, whose blog is being renovated by a Pakistani company, pondered on in companionable silence, amidst of the Bangladeshi food, served in a space allocated to a Chinese restaurant by the Bangladeshi businessman-cum-restaurant owner, Mr. Halim, at the Bangladeshi Ambassador Program event, hosted by Jeff "Calabaza de Vaca" O (find him on Yelp).

It is a potato croquette, albeit, at the size of an emu egg. It was packed with fluffy potatoes, eggs, spices, chicken keema, coriander, fried onion and bound together by milk and flour, where the mild ingredients were kicked up by the spiciness so that no dipping sauce was required. As a matter of fact, it was so filling that it was nothing but a complete meal in itself. The uniformly golden brown panko crust was amazingly greaseless, which was the first time I had to apply the adjective, “greaseless,” to food served in any curry-related establishment – be it Indian, Bangladeshi or Pakistan.

These tender white peas, about the size of green peas, turned bright yellow from the tamarind and tomato; they were stewed with starchy potatoes and spiced with ginger, garlic, chili, coriander and served with boiled eggs. The acidity from the tamarind and the tomatoes combined well with the hearty vegetables, and the spices, while piquant, were controlled as not to overpower the gentle peas.

Don’t tell Mr. Halim, but the shingara, toted as Bangladeshi samosa, was exactly like an Indian samosa. It is not a surprise, as in Bangladeshi, the word “shingara” (also spelled "singara") refers to the commonly known samosa, while the word, “samucha” – so deceptively similar to “samosa,” actually refers to another type of fried snack. Samucha has a filling made of onion and, also chicken keema at Khabaar Baari; then it is wrapped in – here is the difference - a paper-thin spring roll sheet into a neat triangle. ﻿﻿ 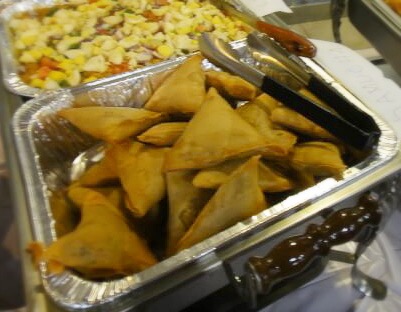 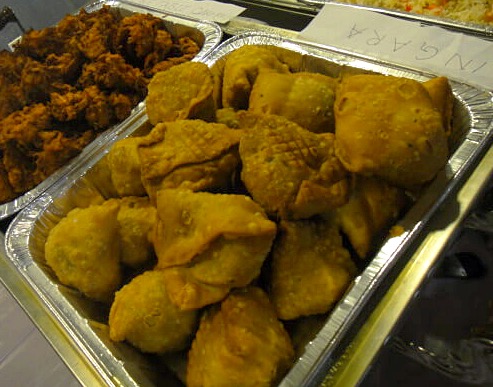 ﻿﻿﻿﻿The shingara served here used a thicker and heavier dough, filled with mixed vegetables and potatoes and pinched roughly to a close – like an overburdened handkerchief (yes, I still not only have them, but use them) stuffed with too many irregularly shaped objects – then fried to a hefty and heavy pouch. On the other hand, the samucha, was light and, upon contact with the teeth, shattered like a good spring roll, revealing the fragrant chicken keema stuffing.

My mouth, expecting the famed flaky fried dough, encountered instead a hard and chewy fried bread, which was not unlike a day-old Chinese you-tiao (fried cruller) – minus the mandatory accompaniment of the soy milk. The moglai was interlaced with eggs, onions, green chili and chicken keema; conceptually, it could be quite addictive and satisfactory. However, despite over thirty years of experience, the chef had failed to entice me into an aficionado of this national snack.

The ambassador proudly noted that Khaabar Baari was the only place where you could get the “king fish” in New York. This rarely seen fish was cooked by the multi-talented chef, who had twenty years of experience in king fish (and thirty in aforementioned moglai). Although the fish had been marinated for several hours in a mixture of lemon juice, salt, fish masala and oil, it tasted surreally similar to a simple dried Japanese mackerel. Is there a trade possibility here?

The essence of polao (also spelled "pulao," "pullao," but labeled as "biriyani") comes from the fusing of flavors as the meat and rice are cooked together with garlic, onion and ginger; and theoretically, the rice will soak up all the meaty juices and spices. Of the three, the beef polao was the most flavorful: the tender cubes of meat were well-spiced, with a hint of its beefiness spiking through the tumeric, coriander and spicy green peppers. The chicken and mutton – written as mutton but described as goat – polao were seasoned similarly absent-mindedly and equally oily, both without an adequate amount of spices to balance them off.

The cauliflowers and carrots were sweet and tender, which, the head chef exclaimed as imported directly from Bangladesh (do not question whether it was necessary or not to go through the trouble). The chopped green onions added brightness to the aptly cooked vegetables, while the fried shallots deepened it with an extra layer of caramelized savoriness.

The roasted eggplant bharta was very spicy with green peppers. The eggplant bharta was pleasantly edible, but the tomato bharta hit the palate with a pleasurable taste akin to an enriched ketchup, with a magnificently concentrated flavor of the tomatoes. After the strong top note of tomato, one was left with a light, refreshing vinegar, whose acidity was rounded off by the sweetness of sugar and raisins.

The very chef of many specialties and decades of cooking experience introduced this tender Bangladeshi kebab to the United States for the first time. The rather lean beef was marinated for ten hours in a spice mixture of cinnamon, cardamom, black peppers and various other spices. But what makes it special and bihari is the addition of raw papaya, whose enzyme acts as a tenderizer of the meat (the same chemical reaction was adopted by Chinese cuisines as well). The long marinade and the enzyme made the beef tender, as to be expected; nonetheless, the meat itself was otherwise relatively flavorless.

Ras Malai are sweet white balls of chenna (Indian cottage cheese), which have been steeped in condensed milk and flavored with either cardamom, or in Bangladeshi, pandan* (regrettably, I could not confirm as to which of the spices of was used, if any, as the sweet, condensed milk overpowered any trace). The soft but bouncy balls were sponges, which soaked up the decadently sweet condensed milk to an unstable and wobbly equilibrium, which broke as it landed in my mouth and exploded into a milky flood. The textures and flavors of the spongy chenna and syrupy milk were different, and yet, they were united by the hypnotizing sweetness of the milk, which coaxed out the innermost child and brought back all the tender memories. Together with gurer sandesh, these two sweets opened my tightly shut eyes to the world of Bangladeshi and Indian sweets.

* Many Asian cooking calls for the leaves of pandan, especially sweets.

During the winter months, the sap of a date palm is collected before dawn. And gurer sandesh is made with this special natural brown syrup and the ubiquitous chenna, which must hold a similarly holy place as the Japanese azuki bean paste. The uninitiated would not be able to discern the subtle and nuanced varieties and, thus, hastily conclude them to be all the same. Not so; not the same at all. The café-au-lait colored sandeshi was crumbly and cool to the touch, which melted instantly on the tongue, leaving a gently sweet dreamy residue – the dew of a sweet, lingering night – and the simplicity of the ingredients allowed the nalen gur to permeate the mouth with its elegant complexity of caramel, spices and nuttiness. One would be most reluctant to wake up from such a sweet dream.

After the flooding of the milky ras malai, the similarly prepared rosgolla had no fair fighting chance, because, instead of sweet condensed milk, it was merely stewed in a plain sugar syrup.

Sandeshi: The square and round whites

Chom chom is the dry version of ras malai, similarly made of chenna and sugar. Its texture is grainier than the ras malai and denser with a consistency quite similar to anko – the Japanese red bean paste. The pronounced flavor of milk solids counter-balanced the sweetness of the small white balls.

The Tragedy of the Common—Sense

Estonia, a Country of Mean